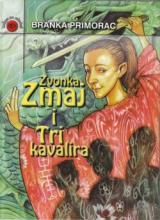 There are two special features to this work. The novel deals primarily with school violence, both intra- and extramural, as well as with its consequences on the psyche and the behaviour of the victims. It also touches upon other vices that accompany delinquent behaviour in the young – drugs, alcohol, petty crime, outbursts, destruction of the environment… In the novel’s deeper layer, however, the author advocates the accumulation of knowledge, useful skills and habits, respecting real authority, civilized behaviour towards and treatment of people, animals and nature, perceiving nature as part of oneself, maintaining it, keeping it… Of all these are virtues children are sometimes ashamed, they give them up under aggressive peer pressure, scared to become the odd man out, to be pushed out of their group. The novel deals also with prejudices we have towards far-away, less-known civilizations, peoples and cultures that are different, women and girls, older people and their intellectual and artistic skills. The framework of the story is omnipresent violence, even unconscious violence of the majority towards those who are not part of the trends, because they are polite and good students, successful athletes and musicians. Branka Primorac is a Croatian writer, journalist, editor and photographer. She was educated Zagreb, where she was born. As a student she spent some time in Milan and in London. She graduated from the Faculty of Political Science and the School of Journalism. She has spent her entire career working for the Zagreb daily Večernji list, but wrote for other newspapers as well. She was also editor of several sections and established, together with Seid Serdarević, a series of the best Croatian novels of the 20th century. She is married with two children. She has been writing since childhood. Her first literary work was printed in a youth magazine under her maiden name Branka Matić. Her first children’s novel, Mama, pazi pas! (Mommy, Look Out, A Dog!), was published in 1992, and several months later she wrote her most popular novel, Maturalac (High School Graduation Trip), which was awarded the Mato Lovrak-Award for best youth novel. The novel is part of the school reading curriculum. Her novel Zvonka The Dragon and the Three Gentlemen was awarded the Anto Gardaš- Award in 2012.