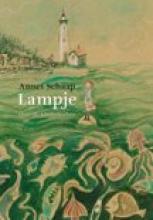 Emilia lives in a lighthouse with her father. He has a wooden leg, drinks too much and makes his daughter do all the work. In the harbour town, everyone calls her Lampje, or ‘little lamp’. During a terrible storm, Lampje realises she’s forgotten to buy matches and so the lighthouse lamp remains unlit and a ship smashes into the rocks.

As punishment, her father is locked up in the lighthouse and Lampje is made to work as a cleaner for seven years in the admiral’s spooky house, where everyone says a monster lives. She makes friends with the housekeeper and her mentally disabled son, but remains curious about the one room where she’s not allowed to go.
Skilfully, Schaap tells a sad and exciting story through the eyes of Lampje and the other characters, including the monster itself. Dead people, such as Lampje’s mother, and even the wind are all given their own voices. A colourful fairy-tale world comes to life, in which the presence of bizarre fairground artistes and bloodthirsty pirates seems like the most natural thing in the world. In these harsh conditions, which are at times reminiscent of classics such as The Water Babies, The Secret Gardenand Sans famille, the appealing and ingenious Lampje discovers that she can stand on her own two feet.
What makes Lampje particularly interesting is the way the novel incorporates the world-famous, tragic tale of the Little Mermaid. Everyone knows how she exchanged her beautiful voice for legs so that she could go and live with the man of her dreams. This story begins where the fairy tale ends.
What if the Little Mermaid had had a child, half-human, half-merman? Little by little, Lampje unravels the puzzle of the monster and of her own troubled past. Lampje has everything it takes to become a classic.