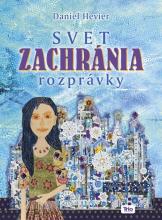 Krištof, a school hokey star, meets under weird circumstances a girl, who sells cigarette lighters on the street. The mysterious girl Zaraza belongs to incomers from abroad, nomads, who linger in a camp outside the city. She and others from her tribe struggle through the modern world as a group of "outcasts", who draw from traditions and values of their ancestors from the connection with the energy and magic of nature. On the other hand, the city is a world of market, influence, and power. The budding love between Krištof and Zaraza stir up the memories in the mind of a tramp Anders, who is searching for his lost identity, and the young couple reminds him something from his own past. The story becomes complicated, when Krištof's father accepts a job offered by Eminent, and thus he and later on also Krištof get involved in a dangerous plan. The plan is related to a mysterious company, in which the energy of humanity is transformed into perfect ice. The consequences strike the whole city, the interpersonal relationships rapidly cool down, and hatred, estrangement, and indifference start prevailing. Because of the illusion of breathtaking hockey carrier, Krištof gives up his family and also the girl, and he devotes himself to Eminent. It is Zaraza, who can save him with a flame from her lighter, but mainly with the flame of her love that melts the ice in his heart. As if the Andersen's story about Kai and Gerda comes back to life in Krištof and Zaraza. The fairy tale theme of Andersen himself alias Anders brings thus the victory over evil and dark forces. It was published in the edition of the guide Reading with Comprehension by Timotea Vráblová. The book was awarded The Best Children's Book of the Winter 2014.