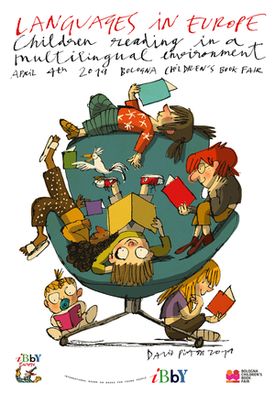 Thanks are due to the generosity of the Fair for providing a room free for the day and coffee and lunch for the delegates.

The Bologna Children’s Book Fair’s exhibition manager, Elena Pasoli greeted delegates and then gave us a wonderful surprise by handing over the welcome to famous Italian author Roberto Piumini who, taking into account the theme of the conference, spoke about the presence of words for children throughout their lives, allowing them to speak and the importance of giving words back their sounds as well as making them available in books. IBBY President Mingzhou Zhang also gave a warm welcome.

The scene for the day was set by Christine Hélot of the University of Strasbourg, France, whose talk was entitled ‘From Bi/multilingualism to Bi/multiliteracy – why should children read books in different languages’. She spoke about linguistic diversity being a social justice issue, asserting the right of all children to have access to multilingual education. She posed the question ‘Why is linguistic diversity discursively framed as problematic?’ and emphasised that it should be seen as a resource not a problem. Christine questioned society’s tendency to organise monolingual spaces leading to exclusion of those who speak minority languages. She believes that teachers have agency to change what is happening in their classrooms. The way school based literacy devalues home languages needs to be challenged.

Christine then outlined the considerable amount of research that has been done on multilingualism, bilingualism, literacy and biliteracy before introducing a range of very interesting bilingual and multilingual texts.

In her talk ‘Brilliant brains: neuroscience evidence for holistic understandings of reading development in multilingual settings’, Carole Bloch from the organisation PRAESA spoke about the prevalence of phonics teaching  in South Africa, something Christine Hélot had also touched on in relation to government policy in France. Carole spoke about the importance of context being essential from the start in learning to read rather than decoding without comprehension in literacy programmes that promote part to whole rather than vice versa. Our hunger for meaningful patterns translates into a hunger for stories. Play is the key learning mechanism for children.

There are issues around the status and perceived value of languages. In South Africa many children experience language shock - they haven’t learned to read in their home language, then they are taught in English when they start school.

Graphic designer and illustrator Marion Bataille described in words and pictures her universal alphabet project - an exhibition she has created about seeing alphabets differently. She considers that children learning to write have some of the same considerations as graphic designers. Letters should always show how they are built - deconstruction is as important as construction. Marion commented that when you leave your country of birth an alphabet chart is a bit like a photograph.

Then followed the first of three panels. This one focused on experiences. Writer, illustrator and teacher Amaia Hennebutte, spoke in Basque which was especially important given the subject matter of the conference and the fact that most of the presentations throughout the day were in the dominant language of English. The normalisation of Basque language started post Franco 1982-3. Basque children’s literature is still very young and its development and promotion faces many problems, chiefly the lack of co-ordination for political reasons and the lack of autonomy through not having a state. Basque is a minority language and therefore there is a small market – there are 700,000 Basque speakers in Spain and 6,000 in France and the latter is decreasing.

However, there is a strong belief that culture is universal despite all the challenges facing Basque children’s literature and solutions are being found to promote children’s & YA literature. Training is being provided for creators. Bilingual books are being published for people who read in the majority language. Literature written only in Basque is being promoted. Technology helps with parents who can’t read Basque – a QR code enables access to majority language. World literature is being made available in Basque through translation. Projects include family book clubs; training for teachers; leaving collections of 150 books in schools for a month.

Librarian Giovanna Malgaroli spoke about the Mamma Lingua project organised through Nati per Leggere which promotes literacy in Italy within families with babies from a very early age. Mamma Lingua (Mother Tongue) encourages reading books in one’s own language. The project was created in 2015 with 127 preschool books in a range of languages - Albanian, Arabic, Chinese, English, French, Romanian and Spanish which are the most spoken in Italy among the migrant communities.. Giovanna explained the criteria for choice which included the idea that the books should be challenging but not frustrating. In addition to books in each language, several “Titoli Ponte” or “Bridge titles” were selected – classic books that are internationally known and therefore make links between cultures. In 2017 Mamma Lingua became a circulating book exhibition.

Two French librarians, Myriam Jeanne and Aïcha Marok, appeared in a short film, explaining the thinking behind the Discovery bags they have developed containing several books in foreign languages which they loan out to borrowers in the public library where they work – currently they are in Arabic, English, German and Spanish and they usually include a variety of different types of texts.

Following lunch we were treated to a lively interactive story session with Leila Garsi, Enrica Menarbin and Antonella Saracino who gave us a flavour of the work they do with children in the Salaborsa Ragazzi library in Bologna which has books in 94 languages. They demonstrated trilingual storytelling in Italian, Arabic and English and then invited participation so that other languages were added – Armenian, Swiss German, Irish and Flemish.

The first speaker in a panel on publishing and distribution was Amna Al Mazmi from the Kalimat Foundation for Children’s Empowerment in the United Arab Emirates. They began the scheme to pledge a library in 2017 at the Sharjah Book Fair. Each portable library pledged includes 100 titles in Arabic. Pledgers are asked where they want the libraries to go. In Italy eleven portable libraries including bilingual books have been funded so far.

Pam Dix spoke on behalf of Mishti Chatterji, the UK publisher at MantraLingua, who for some years now has been publishing e-books as well as dual language printed books. An innovative development is the Talking Pen which enables access to a much wider range of languages as it is possible to use it to record languages not already loaded. Pam demonstrated how the Pen works with sheets of languages and phrases and with books. Another aspect of the development of the Talking Pen is that it has been used with visually impaired children through working with the Royal National Institute of Blind People (RNIB).

Sabine Fuchs from the University College of Teacher Education in Graz/Styria showed some of the multilingual books that have been published in Austria. She focused on Kommt ein Boot a poem by Heinz Janisch in 11 languages with words from a variety of other languages incorporated, illustrated by 11 different artists.

Silvija Tretjakova spoke about reading promotion in Latvia, which is inspired by Daniel Pennac’s Comme un roman (Like a novel). She talked about libraries in Latvia itself and also services provided to the Latvian diaspora, mainly in Europe, and about their campaign to involve fathers more in reading with their children.

The final panel focused on resources.

Eva Devos from IBBY Belgium/Flemish Reading Association talked about the information sources to find out about books available in many languages, including the IBBY Honour List, the White Ravens list produced by the International Youth Library, the IBBY Europe database of books in languages spoken in Europe, including languages spoken by refugees. List of Arabic books have been produced by IBBY France and the International Youth Library.

Barbara Jakob from the Swiss Institute for Children’s and Youth Media introduced an online database which gives access to rhymes in German, French, Italian, and English. The passing down of rhymes is not so prevalent now due partly to migration and generations of families living far apart hence the need to collect and disseminate them. Presently there are over 1100 rhymes in 20 languages on the database.

Denis Beznosov from the Russian State Children’s Library spoke about a major project to compile The Anthology of the Contemporary Children’s Literature of the Peoples of Russia which includes 870 works and shows the ethnocultural diversity of Russia.

After an enormously informative and inspiring day, delegates left with much to think about and many ideas to consider putting into practice.