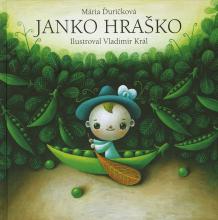 A well-known children book contains two fairy tales. The classical fairy tale of a boy, little as a pea, and his adventures, ingeniousness and sagacity, which lead him to a happy ending. The other fairy tale is a story of Little Johnny, who had been disobedient to the orders of his grandma and grandpa, and thus, a fox kidnapped him and took him away to her den. However, in comparison to the first fairy tale, in which Johnny Little Pea saves himself alone, the second tale ends differently: the boy is saved by his grandma and grandpa, and if they had not intervened, he would have suffered for his disobedience. The book is enriched with dynamic illustrations in vivid colours. They are depicted by Vladimír Král, who not only illustrates the story, but uses the illustrations to wittily comment on the story. The book was awarded The Most Beautiful Children's Book of the Spring 2018.