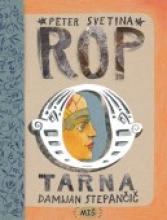 Peter Svetina (1970), writer, poet, translator, university professor and literary scientist, has created an unusual collection of texts of various literary and artistic forms. The title says that it is a »lumber room«, that it is a »warehouse for old, useless things« in the context of individual stories also a region, a shelter, a shrine to old, unserviceable things, or more properly said: things that do not have any labels of use. Even more, this is a space in which even order does not have a sticker and everything is therefore available to the minor and major investigator. The view into the lumber room is also indicative: a small window, a large porthole in the shape of a letter »o« on the cover, through which passers-by can see the interior of the book: the inside of a head, in which thought dwells! A person does not have the power, the authority by which to prevent thinking, to think of specific things but he has the power to employ thought with reflection. The stories and poems in Ropotarna, with illustrations by the top illustrator Damijan Stepančil (1969) are thus dedicated to imagination and feeling. By means of generally human adventures, fears and courage, the writer talks to us as to friends, who in no way wish anything sad, as to those who respect things and the people around them and who are now and then also happy. The illustrator also masterfully follows this relaxed approach. In addition to the normal index, which follows the 12 stories and 9 poems, at the end are added a further two material indexes, subject and name inventories of all that the lumber room offers the reader's imagination.