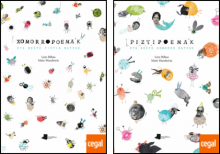 “Bug Poems and Other Beasts” and “Beast Poems and Other Bugs” make up a set of two books, two collections of poems published with the intention of being part of one and the same project. They both develop a similar theme and a similar proposal: in the first, the Biscay-born writer Leire Bilbao begins with poems about small things, bugs; and ends in the second with poems for beasts, the big ones. The first of the poems in “Bug Poems and Other Beasts” is devoted to ants. And the last poem in “Beast Poems and Other Bugs” also ends by making a reference to ants. And each of the two volumes in this duology is made up of the following sections:
Water poems (tuna fish, mackerel, sharks, jellyfish, etc.)
Poems with wings (crows, dragon flies, butterflies, flies, etc.)
Reptile poems (snails, snakes, tortoises, etc.)
Poems that roar, grunt orbray, etc. (lions, pigs, zebras, etc.)
In both “Bug Poems and Other Beasts” and “Beast Poems and Other Bugs” the puns are turned into poetry. In both, Bilbao uses traditional setups, but the proposals she makes smell brand new. They invite us to play anywhere, at home, at school and in any town/village.
The pages of these two books are bursting with bugs and beasts and in them we can hear their laughs and whispers, we can hear them talk about their things, etc. If we accept their invitation we can find thousands of options for playing: poetic mini-stories, tongue-twisters, dialogues, verses, long, short and nano-poems.
With illustrations by Maite Mutuberria, this work featuring musicality, onomatopoeia, rhymes and puns signifies a game-changerin the creativity of small kids who will enjoy reading them.