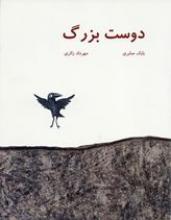 Ravens are clever and sociable birds. No surprise then, that the curious and courageous little raven girl in this book “discovers” an elephant and makes him her friend. True, he is completely different, not least because he is unbelievably tall, but these are mere details. Full of joy and enthusiasm, she tells her mother how lucky she is to have found a friend. When the mother realises who her daughter is talking about, she voices a typically adult concern and lists several reasons allegedly pointing against this pachyderm. For her daughter, however, appearances are unimportant. She won’t let herself be talked out of this friendship; instead, she comes up with convincing counter arguments. This amusing story about otherness, prejudice, and friendship is captured in pictures rendered in various shades of grey – perfectly suitable for the protagonists’ feathers and skin. In an imaginative way, the pictures illustrate the disagreement between mother and daughter, which, in the end, doesn’t manage to stop this friendship.
For 5 years and up.
Also available in a German edition at info@baobabbooks.ch.