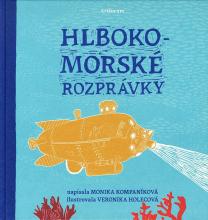 The story takes place deep down below the sea's surface. There are swimming diverse monsters, fishes, octopuses, dragonfishes, sea-maidens, shellfish, gastropoda, gigantic mammals, and sometimes a submarine or a bathyscaphe gets lost in there. Monika Kompaníková will lead you into the darkest depth, to a place, where the gloom and coldness is only. However, even at the bottom of the deepest abyss, in the depth of more than 10.000 metres, it is possible to find some form of life. Indeed, at the bottom of the deepest abyss lives one fish. An ugly, lazy, but good-hearted fish Biba, and her friend Rado, the snake, and other animals, brighten the darkness in the sea depth with their lanterns, and together they carry on adventurous expeditions. Numerous awards prove the quality of the book. The book was awarded The Most Beautiful Children's Book of Slovakia 2013 for illustrations by the Award of The Ministry of Culture, two BIB Plaque 2015 (The honorary deed of the IBBY to the publisher and Mayor of the Capital City Bratislava Award to the illustrator) and The Most Beautiful and The Best Children's Book of the Spring 2013.