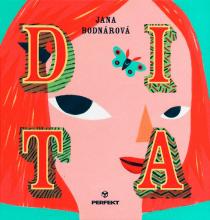 Dita is a small girl, who lives with her parents and friends in a small city. Her stories contain seemingly common topics, (visit to butterfly exhibition, meeting a street accordionist, trip to castle ruins, visit at her great-grandma, etc.), however, the method of perception and presentation in the text is very special. The narration is based on the partnership dialogue between the adult and the child, which is depicted both in the narration style, that is seemingly simple but at the same time clean with an unambiguous meaning, and in the selection of themes and "pictures". Dita is a very perceptive and sensitive girl, who loves watching people and nature. She loves animals, enjoys playing with the dolls, and loves dreaming. However, there is much more behind these pictures, as they express at the same time imperceptibly messages on how people should behave to each other, to animals, and to the whole nature. The stories point out the positive relationship to nature, animals, people, and resemble Dita's feelings regarding life circumstances and experiences of the contemporary world. They strongly build up moral values, sense of justice, inner world and child's personality. The book was awarded The Best Children's Book of the Spring 2014.