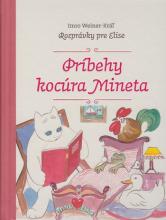 It is a book of stories of a tom cat Minet, that the father sends to his daughter to France after their separation. Minet, holding the book in his paws, shares stories with his animal and children friends, which are inspired by a folk and authorial fairy tale, but there are included also humorous adventures from his own life. It is a composition of fairy tales, whose dominant feature is an illustrational artistic interpretation. The stories are extremely entertaining, dynamic, and humorous, though love, desire, sadness, and a long distance, which separate two beloved beings, conclude their authorial end. There is also great responsibility not to be overwhelmed with sentiments and melancholy, because that would stop the transfer of true love. The picture book, that is in this genre atypical due to its format, resembles the elegance of graphical quality. Lastly, The Stories of Cat Minet (The Fairy Tales for Elise), are not even at the first glance a standard picture book, but it is a type of a modern retro book, by whose supertemporal artistic and communication value, it exceeds the framework of nostalgic homage to the extraordinary artist. The book was awarded The Most Beautiful Book and The Best Children's Book of the Spring 2016, and a Diploma Paper as one of The Most beautiful books of Slovakia 2016.