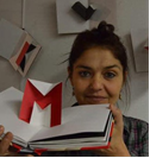 Marion is a French graphic designer, illustrator and author for children. For 20 years she has been studying the pop-up technique. She has used it for several books such as Livre de lettres (Thierry Magnier, 1999) and Bruits (2005). Her Op-Up project, an alphabet constructed through movement in space, was published in 2008 in nine countries with the title of ABC3D. The book won several awards such as IBBY Honour list (Switzerland, 2010), Meggendorfer Prize (New York, 2010), Night of the Book Award (2009), The Most Beautiful French Books (2008). She has worked for different publishing houses and magazines such as Le Monde, Libération, Gallimard, Télérama, Bayard, Dada magazine, Centre Pompidou, Seuil, Rouergue, Thierry Magnier. She runs courses and workshops for adults and children on typography and alphabets.