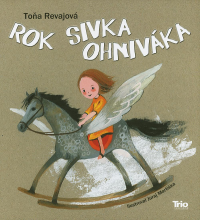 The book written by Toňa Revajová was recognised by the contemporary literary criticism as the most important piece of Slovak contemporary production. Even though the story is focused on the little readers, it is gnomic, as it addresses all age categories. It is a symbolic narration about following one's dream. The little girl Anna attends the kindergarten, however, she cannot wait to get to school. She is waiting patiently for the right moment. In the meantime, she comes frequently to the school to see her sister, and thus, she is unnoticeably preparing for her school life. At the end of holidays, little Anna is prepared to go to school, but the headmaster refuses to enrol her, as she reaches 6 years no sooner than in November. However, the little heroine is patient and persistent, and this leads her to her destination: little Anna becomes a schoolgirl. The moment of death of another little girl, from whom Anna inherited a primer textbook, is depicted very sensitively. This moving book for children of younger school age was illustrated by Juraj Martiška. The book was awarded The Best Children's Book of the Autumn 2018.